Steel Geisha designs has a passion for molten metal. 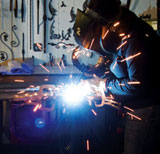 It’s the oldest story in the world: boy meets girl, sparks fly, heat gives way to fire. Hot fire. More than two thousand degrees hot, in fact, fire hot enough to puddle steel. Be warned: this is a love story that might make your own feel tepid by comparison. But before surrendering to jealous despair, know that—for a fair price—you can have a piece of it, too.

Think blacksmith, and Steve and Anastatia Chiurro don’t readily come to mind. They’re not your prototypical smiths, even given that the craft itself could stand in as the bespoke poster child for times long gone. He’s never rocked a handlebar mustache, and she’s never claimed to whisper in “horse.” They waft a funky urban chic, in fact. He, a bookish, tattooed James Dean; she  a former child-care provider and jewelry maker.

In a roomy warehouse on a nondescript stretch of Sonoma’s industrial corridor their busy warehouse welcomes the curious with a wall of shiny corrugated steel. Behind the curvy wall, just visible through the peekaboo cutouts, is Anastatia. Even in jeans and a tee, there is something elegant about her. On the other side, hunched over a desk handling the phone that never stops ringing for long is Steve, trending toward dark and handsome. This is the second time around for both and together they make a striking pair.
On a far wall in the warehouse various samples hang: beautifully sculpted hinges, ornate lengths of rail, sconces and fixtures with details so delicate it’s difficult to imagine them forming from molten metal. Even harder to imagine is the objects taking shape at the hands of the pretty woman with the wry smile or her bookish man. But this is Steel Geisha Designs, the brainchild of two kindred spirits, where old world meets new and beauty finds its strength. The business is run with the concept of community at its base. “We do large, high-profile client jobs but we’ll also fix your pots and pans when they break. One client brought in a tiny piece of his elderly mother’s antique espresso maker for repair. He’d tried to convince her just to replace the old machine, but she was attached. So we dropped what we were doing and fixed the thing. Is it a moneymaker? Absolutely not. But it’s a service we enjoy doing. In a small town, our biggest marketing is word of mouth. It’s how we survive,” says Steve.

After the pair collaborated on a series of gorgeously Zen bell towers for a Salute to the Arts festival, Steel Geisha Designs emerged. From the Japanese, geisha translates as “artist” and the steel part was a gimme. The two had collaborated on dozens of projects over their years of acquaintance, and as their association steadily morphed from professional to personal, discovered—like any well-matched couple—that their individual strengths complemented the other. They fell in love, opened a small shop, and married soon after. Steve, with a background in engineering and design, does much of the artistic rendering, while Anastatia, a second-generation smith, executes the designs. She picked up the trade after half-heartedly registering for a JC welding class that, to her surprise, she “loved, loved, loved.”

Their work is fabulous, gorgeous, it’s brilliant. But don’t call them “artists.” With the capacity to render from steel almost anything imaginable, they prefer to be recognized as craftsmen. “We make things with our hands, and we take great pride in that. We have materials. You pay us for our materials and our labor and our talent. But you don’t pay three times more for our name. I don’t believe in that. I don’t care how big we get, we still don’t think that way,” says Steve. You can’t accuse them of opportunism, either. “We have a product line of light fixtures, and people always say ‘if you sent this to China you could get it made for a fraction of the cost and just make money,’ but that’s not what we do,” says Steve. “I know I could design a hundred things and send them to China and have them mass-produced. I know that. But I’d rather sell you something we made with our hands right here in Sonoma.” His grips the desk’s surface, long fingers fanned wide. “No one makes anything anymore. We take pride in making things, and making them here. The creativity, the craftsmanship, the fabrication come out of this building.” In the distance an anvil strikes steel, its steady ping-pinging a strange, beautiful music.

In only four years since officially hanging their shingle the shop has grown from a “mom and pop” barely making ends meet to a three-man operation with far more work than can be fit into 40 hours. “We never say no,” explains Steve of his approach to new business. “We might say ‘you’ll have to wait a bit, but we never say no.” Started in a small corner of the warehouse it now fills, Steel Geisha Designs built its reputation the old-fashioned way, one client at a time. Their lone employee, a cheerful fellow called Ford, is like an honorary member of the family. “We looked for a long time for Ford,” says Steve. “Maybe it sounds corny, but we thought of it like he was joining our family. He’ll be with us as long as we’re here, and maybe someday when we’re not here, he can still be here. We’re family oriented in our approach to business.”

And not in the crazy-drunk-uncle sort of family way. Folks like having the Steel Geisha family around. “Plenty of our jobs last several years,” says Steve. On one of their more complex assignments, inspired by the client’s desire to return his old-world house to it’s roots and starting with an heirloom chandelier found hanging above the client’s forebears in an ancient photograph, the Steel Geisha team slowly replaced every hinge and latch in the house. Every railing, every gate, most of the fixtures. One rod of steel, one hammer stroke at a time.

Anastatia and Steve: a marriage made in metal.

The big idea is authenticity. Made in America, can’t find it at Pottery Barn, one-of-a-kind authenticity. It’s almost quaint, the way they talk about the work.

It’s an old-fashioned passion for craft that motivates; profit alone doesn’t fire the engines at Steel Geisha. You get the sense that the two feel called to something higher, a need to leave the world a bit lovelier than they found it. A footprint, a legacy, a bequest meant to ennoble us all.

It is somewhat startling to find people in pursuit of goals loftier than simple acquisition. It’s seems almost un-American, the sense of soulful contentment both radiate. As if what they’ve built already is enough, as if, were today their last, they’d be sated.

Steve and Anastatia Chiurro aren’t gunning for the fast lane. They putter along at a pace of their own making, hands always busy. Building with care and confidence something both beautiful and rare, something exceptional, made to last.